Arti, Baby, Chandni, Dolly, Esha, Falguni, Gopi and Himani are sitting around a square table in such a way that four of them sit at four corners of the square while four sit in the middle of each of the four sides. The one who sits at the four corners face the centre of the table while those who sit in the middle of the sides faces outside. Each of them likes a different subject - Mathematics, Hindi, English, Biology, Chemistry, Physics, History and Geography. (None of the information given is necessarily in the same order). 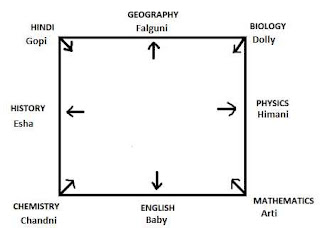 Popular posts from this blog

Career opportunities as a web developer

By Sandeep - July 08, 2021
There are many opportunities as a web developer. Any one can become as web developer with some set of skills. If you want to become a we developer Below are the things you can consider. Technical things to know: 1. HTML (Pure frontend design) 2. CSS (Adds style to a web page) 3. Javascript (give move client side programming in web pages) 4. PHP/Java/.Net Any backend language ( to write server side program) 5. mysql ( for database)     Above are the list of things know/learned to become as a web developer. There are many opening in all the companies. As every company require a website. And its not enough to have a website and it needs to be maintained.      Developers are required for development of website and maintenance.      Most of the people think that they can't learn such technologies, and they are hard to learn. Its not true. If you start from scratch It's easy to learn and become a developer. If you are not  good at logical skills, yet you have change to become web de
Read more